Letter from the Minister

Read the response from Minister Neil O’Brien to our letter sent to him following the launch of our Case for Culture report: https://northernculture.org.uk/wp-content/uploads/2022/05/scan_20220405094308.pdf

We are delighted to be launching the Northern Culture All-Party Parliamentary Group’s second inquiry: A Question of Sport? An Inquiry into the cultural value of sport to the North’s cities, towns and communities.

Our first inquiry was enormously successful. The Case for Culture: Levelling Up Northern Culture Report made a clear case to Government for culture to be the centre of levelling up, and Government listened – almost £70 million was announced to invest in culture outside London. It achieved cross-party consensus on the need to level up Northern Culture and deliver greater access, investment and equal opportunity for the North’s rich seam of talent and provided a blueprint for how the North can rebuild cultural confidence, adapt and become more resilient and develop new audiences for culture.

The Northern Culture APPG’s second inquiry will look specifically at the major role sport plays across the North in terms of shaping the region’s cultural identity and value.

Speakers will be discussing these key questions:

We are holding a launch of the session of the 15th June, 10-11 via Zoom. Please register on Eventbrite here.

INTRODUCTION AND WELCOME
Julie Elliott MP (Co-Chair) welcomed everyone and acknowledged the success of NC APPG’s
‘The Case for Culture Report’. Julie Elliott, talked about the impact that the report has had,
including the recent announcement by DCMS, to provide £75 million by 2025 to places which
have been culturally under-served in the past.

ELECTION OF OFFICERS
The following officers of the Northern Culture APPG have confirmed that they wish to remain
as officers and were re-elected unopposed:

The following Parliamentarians had put their names forward to become Officers. All were
nominated and duly elected unopposed:

REGISTERED CONTACT AND SECRETARIAT:
It was agreed that DevoConnect, Secretariat, NC APPG would continue as the Secretariat and
named contact for the Northern Culture APPG.

You can read the NON-VERBATIM MINUTES in full below: 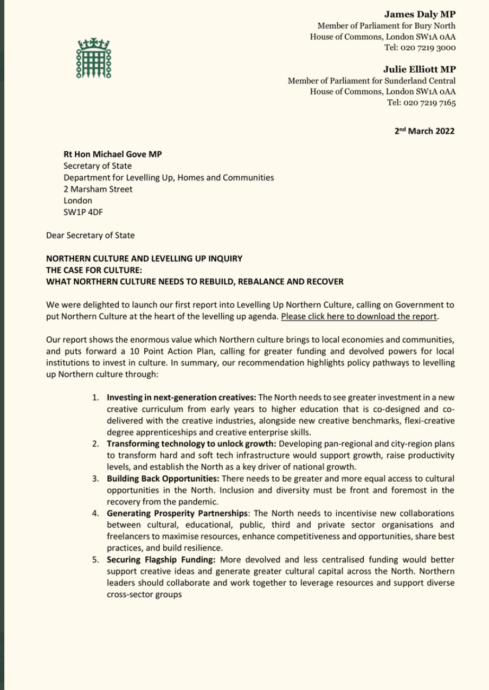 Letter to the Levelling Up Secretary

We were delighted to launch our first report into Levelling Up Northern Culture, calling on Government to put Northern Culture at the heart of the levelling up agenda. Please click here to download the report.

Our report shows the enormous value which Northern culture brings to local economies and communities, and puts forward a 10 Point Action Plan, calling for greater funding and devolved powers for local institutions to invest in culture. In summary, our recommendation highlights policy pathways to levelling up Northern culture through:

We very much hope that you will embrace the Northern Culture APPG’s recommendations and refer to its very useful analysis to shape and inform future Government policy thinking.

We look forward to receiving your reply and having the opportunity to discuss our report and hopefully welcoming you to a future meeting. 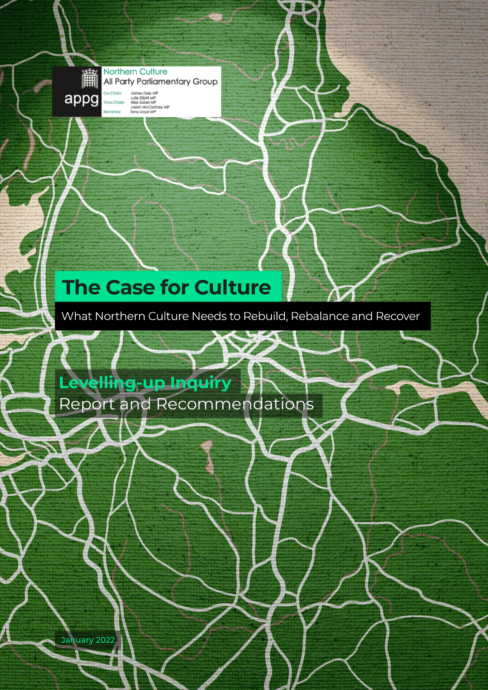 On Wednesday 19th, and for the first time, Northern MPs, regional mayors, local authority and cultural leaders will come together to make the case for Northern culture.

The Case For Culture gathered a significant body of evidence on what the North needs to rebuild, rebalance and recover and achieved pan-Northern and cross-party consensus on its findings and recommendations. Its 10 point action plan makes it clear that Northern culture must be embedded – and not ignored – in the UK Government’s levelling up White Paper.

NCAPPG – The Case for Culture Report

Newly elected Mayor of West Yorkshire and former actor Tracy Brabin is set to give evidence to MPs at an inquiry into how the North can rebuild culture in the wake of the pandemic.

The Northern Culture Club – a cross-party group of MPs chaired by Julie Elliott MP and James Daly MP – is examining what Northern Culture needs to rebuild, rebalance and recover ahead of its State of the North report, due to be published in early 2022.

Giving evidence alongside Tracy Brabin will be Lord Mendoza from the Department of Culture Media and Sport, Sally Joynson from Screen Yorkshire, Dr Laurence Clark from the Disabled Artists Networking Community (DANC), Andrew Mackay from Tullie House Museum and Art Gallery in Carlisle and Dave Jenkins of The Old Courts in Wigan.

As part of the Inquiry the group is gathering evidence from cultural organisations and politicians from across the North which will be used to draw up a Post-Covid Action Plan’ to rebuild Northern culture after the pandemic and highlight the need to level-up investment to support cultural growth in the North’s towns and cities.

During the session, evidence will be given on:

Co-Chair of the Northern Culture All Party Parliamentary Group Julie Elliott MP said: “We are looking forward to welcoming Tracy Brabin, Lord Mendoza and representatives from cultural organisations across the North for the second evidence session in our Inquiry into what the Northern Cultural sector needs to Rebuild, Rebalance and Recover post-Covid.

“We’ve already had one fantastic evidence session and hundreds of written submissions to our Inquiry, and we are looking forward to hearing from our expert panellists on their view on what needs to happen next.

“Culture will play a hugely significant role in the North’s recovery post-covid. The sector contributes a huge amount to our economy and by bringing together key players from across the North, we hope to make the case to Government of the benefits of supporting a thriving Northern cultural sector.

“The purpose of this session is examine what needs to be done to ensure all communities have the funding they need properly invest in culture, that our cultural institutions have the support they need to rebuild, and that sector remains accessible for all.

“Northern towns and cities boast fantastic venues, events and festivals that are famous around the world, and after more than 15 months apart, people are excited to come together to celebrate culture once again. I’m proud that the Northern Culture Club is helping to enable that.”

MPs fight back for Northern Culture!

A cross-party group of Northern MPs has come together to form the new Northern Culture All Party Parliamentary Group (NC APPG) to provide a strong and cohesive voice to bang the drum for Northern culture in Whitehall and Westminster.

The North’s cultural industry has been hit hard and faces an historic challenge as the global pandemic continues to affect our everyday lives.  The Northern Culture APPG will promote and champion the huge economic contribution made by the North’s cultural sector, build consensus and fight for what the Government needs to do to level-up and build back the North’s cultural potential now and in the longer term.

“It’s clear that all Northern MPs are united in Parliament about the levelling-up agenda.

For the MPs that make up the APPG, we are determined to provide a strong voice in Parliament for Northern Culture for not just the cities of the North but smaller towns like my constituency of Bury North, who have great potential to flourish in the cultural sector but have sadly been hit by the pandemic.

No matter your background or where you are from, you should have access to culture. The APPG are determined to make a difference and make sure Northern culture has a roaring voice in Parliament.”

“There is such a rich diversity and heritage of culture in the North, we don’t need to look very far across the North to find a whole range of great cultural institutions. The APPG will speak up for Northern Culture and its institutions, working hard to get people back on their feet, into venues and viewing what the North can offer”.

“There is so much culture going on in our Northern communities and we will work hard to make sure funding is spread fairly across the North, not just in the South. I’m looking forward to working cross-party with colleagues on this exciting and very timely APPG.”

Becoming a partner of the Northern Culture Club provides your organisation with the opportunity to support and inform the work of the Group. For further details please get in contact at [email protected] .

We saw the hugely positive impact on Hull in 2017, including £13m investment from then Chancellor @George_Osborne.

The next City of Culture in 2025 will be announced live on @BBCTheOneShow on Tuesday 31st May!

We welcome @NeilDotObrien response to our Case for Culture inquiry report: there is a lot of work to be done to unleash the economic & social power of our creative industries & culture post-pandemic @NorthumbriaUni #LevellingUp https://twitter.com/ncappg/status/1529447783819788288

DevoConnect acts as the secretariat for Northern Culture Club.

The Northern Culture APPG will kick start the debate on what the sector needs to recover from the current crisis and to build back support for, and investment in, the North’s cultural sector in a post-COVID and post-Brexit world.